The anterior cruciate ligament is one of the major stabilizing ligaments in the knee. It is a strong rope like structure located in the centre of the knee running from the femur to the tibia. When this ligament tears unfortunately it doesn’t heal and often leads to the feeling of instability in the knee.

ACL reconstruction is a commonly performed surgical procedure and with modern techniques in arthroscopic surgery can be performed with minimal incisions and low complication rates.

The anterior cruciate ligament is one of the major stabilizing ligaments in the knee. It is a strong rope like structure located in the centre of the knee running from the femur to the tibia. When this ligament tears unfortunately, it does not heal and often leads to the feeling of instability in the knee.

An ACL injury most commonly occurs during sports that involve twisting or overextending your knee. An ACL can be injured in several ways:

When you injure your ACL, you might hear a loud "pop" sound and you may feel the knee buckle. You may feel the bones separate and then move back together. Within a few hours after an ACL injury, your knee may swell due to bleeding from vessels within the torn ligament. You may notice that the knee feels unstable or seems to give way, especially when trying to change direction on the knee.

An ACL injury can often be diagnosed by carefully listening to the history of the injury. Physical examination of the knee is particularly important and will often confirm the ACL rupture which has been predicted by the history you have provided. X-rays may exclude obvious fractures. MRI scan will often reveal bone bruising (micro-fracturing) and meniscal and articular cartilage injuries. Arthroscopy is rarely needed these days for diagnosis (but is of course used for surgical repair).

The clinical tests used by your surgeon include the Lachman, the Anterior Draw, the Pivot Shift and the Lelli.

The goal of ACL reconstruction surgery is to replace the torn ACL in your knee with some of your own tissue to restore its stability. Most torn ACLs do not repair themselves.

The two commonest sites utilised for reconstruction are the hamstring tendon or tendons, and the middle-third of the patella tendon (with small pieces of bone at both ends). There are of course pros and cons to both of these. They are called “autografts” – as they come from you. The results are generally superior to “allografts” – those donated by a person who has died in an accident. Artificial ligaments currently are controversial. Whilst some have good early results, there are high failure rates, and the ongoing damage caused in the knee by microscopic fragments of failed synthetic “ligaments” can be catastrophic. Dr South does not use artificial “ligaments” for ACL reconstruction.

Anterior cruciate ligament reconstruction is a surgical procedure to replace the torn ACL with part of the hamstring tendon or patella tendon taken from the patient’s leg. The procedure is performed under general anaesthesia.

Two or three small cuts about 5mm-long are made about your knee. An arthroscope, (a tube with a small video camera on the end) is inserted through one incision to see the inside of the knee joint. Along with the arthroscope, a sterile solution is pumped into the joint to expand it enabling a clear view and space to work inside the joint.

An incision is made over the hamstring tendon attachment to the tibia, or over the patella tendon, and the required tissue is harvested and the graft is prepared. The remnants of the torn ACL will be removed. Small tunnels are drilled into the upper and lower leg bones where these bones come together at the knee joint. These tunnels in your bone accept the new graft. Then the graft is pulled through the predrilled holes in the tibia and femur. The new tendon is then fixed into the bone. Various techniques are used to hold the graft in place whilst it heals into the bone. These include screw (interference) fixation or suspensory fixation, or a combination. In most cases, braces are not used post-operatively, as they have been shown not to help, or indeed to interfere with rehabilitation. (In certain meniscus injuries, or combined ligament injuries braces are mandatory.)

Only rarely is weight-bearing not allowed. Meniscal-root avulsion tears must not be loaded for at least six weeks.

Risks and complications of ACL Reconstruction

Some of the possible risks and complications associated with ACL reconstruction include:

A physiotherapist will assist you to walk within hours of the surgery, using crutches. Most people leave the hospital within twenty-four hours of surgery. Ice is of some use in the days following surgery, and anti-inflammatory medications may be used sparingly in the first few days. The early aims of rehabilitation are to regain range of motion and muscular control. Care must be taken to not disrupt the graft. Some weight-protection with one or two crutches is required for two to four weeks in most cases. The first review with your surgeon and physiotherapist occurs at about two weeks following surgery. Regular reviews follow as required. The graft takes six to eight weeks to become attached to the bony tunnels, eight to twelve weeks to have new blood supply, and four to six months for re-growth of nerve supply. Teaching your brain, thigh and calf muscles to interact with your new ACL and its re-established nerve supply takes a minimum of six to nine months. Re-rupture rates are higher in those people who return to previous sports earlier than twelve months.

Anterior cruciate ligament reconstruction is a common procedure and is usually successful. It is usually indicated in patients wishing to return to an active lifestyle especially those wishing to play sports involving running and twisting. 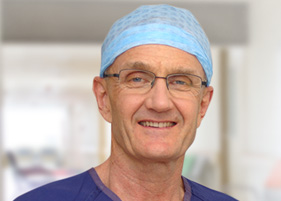